All About Table Tennis Flash Games

Table tennis has been around since the early 1880s when it first originated in England. It was invented as a parlor game to be played by the upper-class once they were done with dinner. In a lot of ways, the basics of the game haven’t changed much since then. There are two sides to the table with a net separating them. On either side is an opponent with a single paddle and ball. One serves to the other and they play, generally, up to 11 with the winner needing to win by 2.

However, the game has also changed in many ways too. All you need to do is look at those who play at the Summer Olympics or as professionals to see how crazy the game can get. The ball is smacked back and forth at incredibly high speeds and each player uses all kinds of spin to throw the ball in countless directions. To be a good player nowadays takes cat like reflexes with eagle eyes to match.

Fortunately, all you need is a reliable Internet connection to play table tennis flash games on Sporty Games Hub. There are a number featured here, each of which brings a little something different to the (ping pong) table. So before you start playing just yet, consider the following about these popular games. 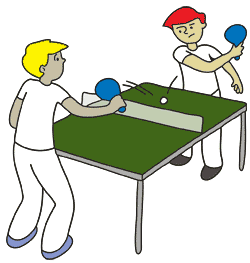 For one thing, there are three main types:

The first type of table tennis online games is probably the most popular. This is where you have the view as if you were actually playing against an opponent. That’s why it’s referred to as a first person game. From this perspective, you’ll get the feel as though you’re playing the game in real life.

Just like with the real world version, these table tennis free games start with a serve from either you or your opponent. From there, it’s on. Your objective is going to be to control your paddle by moving your mouse around so that it makes contact with the ball and sends it back over the table to your opponent.

At first, simple deflections may make the most sense. You simply absorb the ball’s impact from your opponent and then deflect it back over to your opponent’s side. However, as your eye-hand coordination sharpens, you’ll get better at being able to send the ball back with some sting on it and at angles that will make it tough for your CPU opponent to handle. Some games will even let you use some spin to really confuse them about the ball’s flight.

As with other games, as you succeed with table tennis flash games, you’ll progress through the levels and face harder and harder opponents. This means each one will hit harder, at better angles or with more spin. Your eye-hand coordination will really be put to the test then.

Table tennis online games may be some of the most difficult to play, despite their simple premise. You may not think it would be so difficult to keep your eye on the ball, but you’d be surprised. As such, consider starting on an easy mode and working your way up until you’re more comfortable.

Another kind of table tennis free games is the sideline view. In this popular version, you’re still playing much like you would above, but your perspective is now one of a spectator on the sidelines—hence the name.

Now, in some ways this may seem a lot easier, and it is. You really only have two directions to care about, going up and down. So you may think it would be no harder than pong. But give a game like Jeu Table Tennis a try and you’ll see what we mean. It’s actually very challenging, especially when the pace heats up, because the angles are so difficult to keep up with.

Finally, there are table tennis flash games where you play by yourself but just need to get the most hits. Every tennis game is basically about hitting the ball one more time than your opponent. But this type is where you’re literally just hitting a ball up and down. Your perspective is that of someone using a paddle to hit the ball up and down in the air and you have a bird’s eye view.

Again, this game probably seems easy, but it’s anything but. Table tennis online games like this one really test your eye-hand coordination. Plus, every time you hit the ball, there’s a subtle amount of spin you need to control for. Sometimes the ball is still on the screen, but out of bounds, which can be very frustrating.

There’s no doubt about it: table tennis free games are some of the most difficult out there. However, if you practice enough, you’ll get the hang of it and have a lot of fun.